IELTS Vs. TOEFL Vs. PTE – Which Test Is Best For You?

HomeIELTS BlogsIELTS Vs. TOEFL Vs. PTE – Which Test Is Best For You? 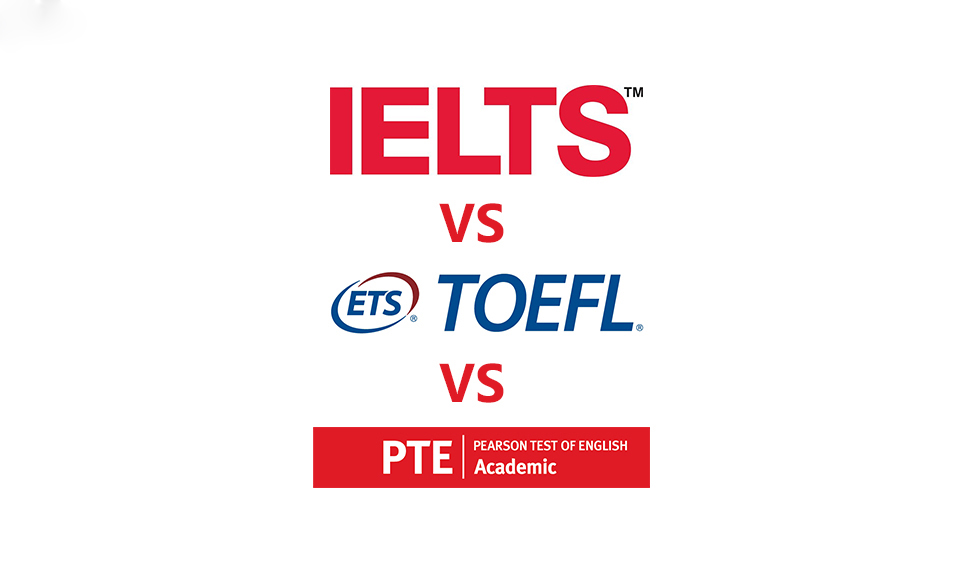 IELTS Vs. TOEFL Vs. PTE – Which Test Is Best For You?

Every year, millions of people attempt either of the English language proficiency tests to submit to the universities or the government of native English speaking countries.

Whether you are attempting any one of these tests or still wondering which test will help you the most, this article is for you and chances are that you will have a clarity about which test amongst TOEFL, IELTS, and PTE is the best for you.

While there are certain similarities in the basic nature of TOEFL, IELTS and PTE, all the three tests have certain varying characteristics too which make each of them unique. Students need to identify their strengths and weaknesses and choose the test which will best suit them score better.

Similarities between IELTS, TOEFL, and PTE:
Before we differentiate the three, let us see what these three tests have in common.

Similarities in the Test Sections of IELTS, TOEFL, and PTE:
The first and most obvious similarity between the three is that they all have the exact same test sections – Reading, Listening, Speaking, Writing. Any individual’s proficiency in a language has to be tested in all four fundamental sections of communication which are reading, listening, speaking, and writing.

Similar Objectives:
IELTS, TOEFL, and PTE all share the same objective of testing and certifying English language proficiency. These tests play an important role when you apply to the universities or for PR/Work of native English speaking countries. They work as a legit proof of your proficiency in the English language which further ensures that you will not face any language barrier during your stay in an English speaking country. So now you already know that TOEFL, IELTS, and PTE share the same fundamentals. The main differences start to show when we go in-depth and study their formation, examination structure, and scoring structure. Let’s dig deeper and see what are the differences between TOEFL, IELTS, and PTE.

What is the difference between TOEFL, IELTS, and PTE?
While they share similar testing sections and objectives, the differences start emerging as we study deeper about these tests. I will start with the descriptions of all the three tests and will build on the differences further.

What is TOEFL (Test of English as a Foreign Language)?
The Test of English as a Foreign Language (TOEFL) measures the examinees’ ability to use and understand English at the university level. The TOEFL Exam scales how well you can combine your listening, reading, speaking and writing skills to perform academic tasks. TOEFL exam is the trademark of ETS and is more commonly accepted by the universities of The United States than in Europe and Australia.

What is TOEFL PBT?
TOEFL PBT stands for Test of English as a Foreign Language Paper-based Test. It is a paper delivered version of the TOEFL test.

What is TOEFL iBT?
TOEFL iBT stands for Test of English as a Foreign Language Internet-based Test. It is a computer (internet) delivered version of the TOEFL test.

Basics of the Tests:

Basics of the TOEFL Exam:
Although TOEFL has both paper-based and Internet-based tests, many of the test locations do not conduct the paper-based (TOEFL PBT) format. The TOEFL iBT has more than 50 test dates per year and is conducted in 4,500 test centres across 165 countries. The test can be retaken unlimited times, but cannot be taken more than once in a 12-day period. Also, a candidate cannot register for another test date that is within 12 days of the existing appointment. TOEFL scores are accepted in more than 8,500 colleges, agencies and other institutions in over 130 countries. Candidates can register online, by phone, by mail or in person. Registrations close seven days before the test date while registering online, in person or by phone and 4 weeks before the test date while registering by mail. In India, the registration fee for TOEFL is $165.

Basics of the IELTS Exam:
IELTS score is accepted as the evidence of English language proficiency by over 8,000 organisations globally. The test is conducted at more than 900 test centres and locations across more than 130 countries. Each year, IELTS is conducted on 48 fixed dates. While the IELTS Academic Version is available on all 48 dates, the IELTS General Training Version is available on 24 dates. Candidates can register online or via mail. The Registration Fees is INR 12600* (*Subject to change or vary).

Basics of the PTE Exam:
Being a relatively new test, the numbers of candidates taking PTE or the number of organizations accepting it might be lower than that of TOEFL and IELTS, but it is catching up fast. PTE Academic scores are accepted by the top UK universities, the top US universities and government organizations. It is also accepted by the UK Border Agency (UKBA) for Tier 4 and Tier 2 visa applications and all the universities in Australia. The PTE Academic test is conducted in a number of test centres across 46 countries. In India, the test price is INR 10900* (*Subject to change or vary). The scheduling for the PTE Academic can be done either online or by phone.

TOEFL Exam Sections:
i) In the TOEFL Academic test for the speaking section, the candidates speak into a microphone and the computer captures the audio. It is evaluated by a human rater. ii) The Writing section involves writing essay responses based on reading and listening tasks and support an opinion in writing.

IELTS Exam Sections:
i) The Speaking test in IELTS is a conversation with a certified IELTS Examiner which is recorded in an audio cassette or a digital recorder. ii)The academic writing section involves questions based on a diagram, graph, process or chart, or an argument. iii) The general writing section involves letter writing and essay writing.

PTE Exam Sections:
i) In the speaking section PTE Academic test candidates speak into a microphone and the computer captures the audio similarly to TOEFL. It is evaluated by a computer program. ii) The writing section includes a lot of innovative question formats. PTE has an automated speech and writing scoring system.

TOEFL Scoring Structure and TOEFL Exam Results:
In the TOEFL exam, the candidates are scored on a range of 0 to 120. The score reports for TOEFL are received within two weeks and after 13 calendar days. TOEFL forwards the scores to four universities of the candidate’s choice for free. The TOEFL result (score) is valid for two years and the applicant has to reappear for the TOEFL exam if he/she needs the TOEFL score after a course of two years.

IELTS Scoring Structure and IELTS Results:
IELTS evaluates the test takers using scores on a scale of 0 to 9 with higher band score indicating a better performance. The score reports for IELTS are received on the 13th day after the test date. IELTS forwards the scores to five universities of the applicant’s choice for free. Just like in TOEFL, the IELTS score is valid for two years.

PTE Scoring Structure and PTE Results:
PTE Academic grades the students on a scale of 10 to 90. For PTE, results are available online within just five days. The PTE sends score reports offering recorded speech samples to admission offices at universities Worldwide. Unlike TOEFL and IELTS, the result (score) is valid for three years.